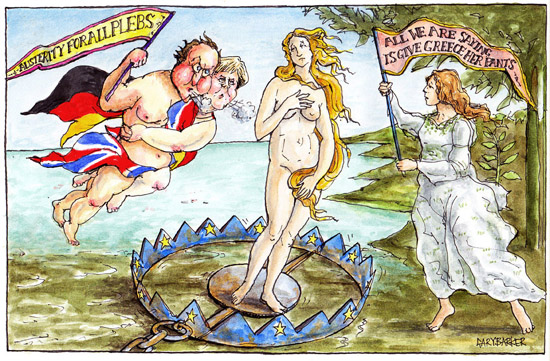 Venus the embodiment of beauty and culture is attacked by the forces of EU austerity David Cameron and Angela Merkel. Editorial created for Tribune by Gary Barker

The UK Prime Minister and German Chancellor greeted the election of the left wing government in Greece very negatively. The new government's anti-austerity stance flies in the face of the right wing ideology of the UK and German ruling parties, which have a much more positive approach to business interests than they do to their societies as a whole. After years of what amount to crippling economic sanctions the first Euro state member has said enough is enough and stood up to the right wing only dialogue that has been seen as the only option increasingly over the last 20 years in Europe.