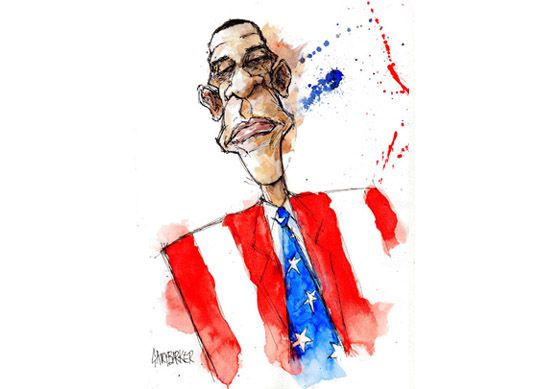 The 44th and current President of the United States and the first African American to hold the office. Born in Honolulu, Hawaii, he is a graduate of Columbia University and Harvard Law School.

As he approaches the end of his second term, the President Obama sees his stewardship of the US reap rewards domestically. However he is facing increasingly difficult international crises. Ukraine partition, the downing of the Malaysian flight MH17 over Eastern Ukraine and worsening relations with the Kremlin, and Russian Premier Vladimir Putin. In Syria, Assad continues his bloody campaign against the rebels and shows little sign of coming to an early conclusion. In Israel continues to pound Gaza with missiles killing huge numbers of Palestinian citizens, in response to Hamas rockets that very rarely penetrate the Israeli 'Iron Dome' and are far less powerful than those being launched by the IDF. However he can take heart from the state of the GOP which is making itself look increasingly desperate and many scoff at their ridiculous attempts to impeach the president.

not so special relationship

Editorials by Gary Barker created for UK and international newspapers including the London Times , Guardian , BBC , Estates Gazette , featuring the UK Prime Minister , David Ccameron , Ed Miliband , Barack Obama , Vladimir Putin , plus comment pieces on the NHS , property market , transport , financial markets and the energy industry. In the upcoming 2015 General Election Labour and Ed Miliband will be concentrating on the NHS and the Conservatives on the economy. Internationally Barack Obama and Vladimir Putin play a dangerous game over Ukraine.

Caricatures of political figures, prominent business people as well as musicians and tv and film celebrities for both publications and for private commissions