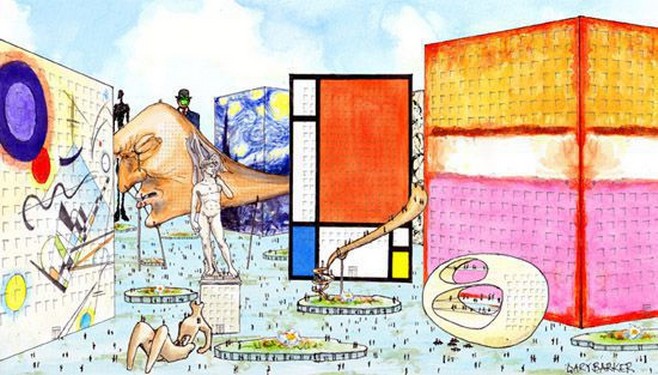 The illustrator's Estates Gazette work over a seven year period include illustrations relating to technological developments and communication. One Michael Heath inspired illustration, depicts a man working from home, economically running many gadgets from his laptop and powered by cycle power. Another shows the development of futuristic hi-tech UK cities connected not only by roads but also by high speed internet links. There is also an image depicting the sharing of information and best practice between the UK and the USA via high speed Trans-Atlantic internet links.

There are also a number of different London oriented illustrations including ones that accompany comment on Indian property investment in prominent London buildings created by the illustrator and the rise of resi-towers that are now sprouting up all over London.

Cartoons and caricatures of Mary Portas and her involvement in helping the UK high street recover has also features prominently with the illustrator and in this example she drags a business man out of the office and out into the real world of the high street. There is also a Lowry pastiche featuring the e-high street, where instead mills towers there are mobile phone masts which disseminate information across the net.

Currency and the movement of capital also feature prominently as topics for the business illustrations. One example reflects efforts to support international currencies during the recovery, which them parachuting to Earth. Another has an insipid Pound turning up late for the sunshine break with the Dollar and the Euro, reflecting the state of exchange rates at that time. British capital investment is shown to be be taking a cruise to the Tiger Economies in one image, while another shows international investment in transport links moving into the UK and another has a British financial manager attempting to catch elusive but available foreign inward investment capital.

Financial rationalisation following the 2008 crash is reflected in the illustrations showing downsizing of staff and property and another shows the dumping of large scale building projects in the City. Another image marks the anniversary of the collapse of Lehman’s while forecasting the recovery is a highly featured issue. The three MacBeth witches cartoons of Chancellor George Osborne, the then Governor of the Bank of England, Mervyn King and the Chairman of the CBI, John Cridland stir the prediction pot to forecast the shape of the economic recovery. And another piece shows the various states of the UK economy since 2010 from meagre, to ice cold to the return to prosperity through three different Christmas dinners.

Cartoons and illustrations of Chancellor, George Osborne feature heavily by the illustrator and is often depicted struggling to keep control of the economy (one example here has him juggling the economy while riding a unicycle around a treacherous mountain path) or trying to encourage growth. One image here has him naked, riding the Miley Cyrus style wrecking ball into the help to buy policy.

Eric Pickles features in one image here trying to hold back the water of the 2014 UK floods, Canute-like, while decked out in a lifebelt and waders. Local issues at council level are also regularly dealt with and here one image shows a beleaguered planning officer deluged by a flood of applications constantly flying onto his desk in the form of paper planes.

There are examples here of many other publications, including Financial Director, a couple of which feature here. Including a cover piece of runes cast to predict the recovery and a return to a successively British manufacturing base, with the archetypal London Bus emerging from manufacturing crates.

There is of course the inevitable cross-over in niche classifciation and some pieces created for property and financial titles can be seen in the caricature and political cartoons pages. For example Danny Alexander as a modern day Mansion Tax Robin Hood can be seen swinging through the forest. Gary has created political cartoons for most UK national newspapers since 2007, including the London Times, Guardian, Telegraph, BBC et al page. And a montage image of prominent business people can be seen on the caricatures page.

Gary's cartoons and illustrations are largely created in ink and watercolour in a fairly traditional style employed by the illustrator, but with a contemporary twist and he has on occasion produced vector style comment pieces.