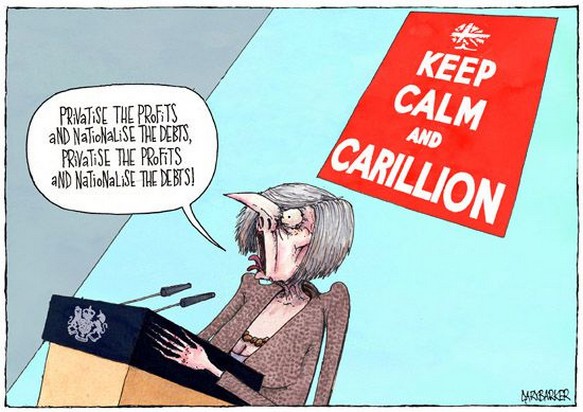 Some of the major news events covered here in cartoons by the cartoonist are the fall of the Gaddafi regime in Libya with analogous link between the fall of Saddam Hussein and the famous image of his statue being pulled down in Baghdad, here a statue of Muammar Gaddafi is toppled by triumphant Libyan rebels. The conflict in Syria is marked by a Guardian image of President Bashar al-Assad painting the walls of Damascus with Syrian blood as the civil war becomes ever more desperate. The Ukraine crisis is marked by two editorials, both for Newsbase. The first is a frustrating chat for President Barack Obama with President Vladimir Putin. The second has President Putin holding the Ukrainian President hostage to his gas supplies to turn his head away from the EU. President Barack Obama and Republican nominee Mitt Romney battle it out in the US Presidential Election boxing ring for Estates Gazette. Former Health Secretary Andrew Lansley, sells the snake oil NHS reforms off the back of an old Wild West Medicine Show wagon as the PM wrings out the oil out of the snakes in the background, as the masses, including Ed Miliband, swallow it eagerly down, in piece warning about the threat of NHS privatisation by stealth, despite the Prime Minister assuring the electorate before the 2010 general election that if elected there would be no top down re-organisation of the NHS, created for the Guardian. There also examples here featuring the usual suspects Ed Miliband, Nick Clegg, Barack Obama and Vladimir Putin.

Every publication has different approaches to content and political cartoons, as well as differing interests. Some publications give the artist almost free reign whereas others are highly prescriptive. Most artists would like as little direct interference and prescription as possible, but some of the best teams work together with the artist to create the best image possible to fit the story of the day. This relationship between artist and editorial staff can be very rewarding and results in some great collaborative efforts in the creation of quality of political cartoons.