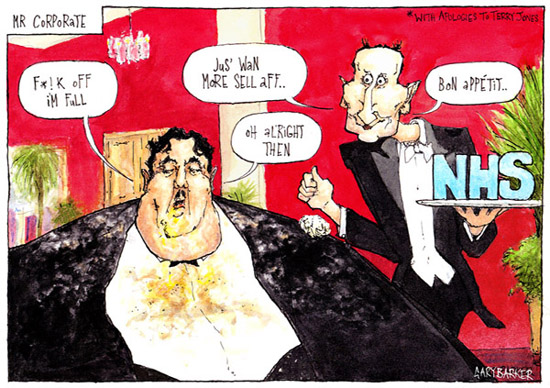 Heath Secretary Jeremy Hunt serves the NHS up. As heatlhcare provision in the UK is slowly given over to the private sector, the Mr Creosote sketch from the Monty Python's film The Meaning of Life seemed apposite. People who have seen the film could not fail to appreciate the meaning behind the satire as the corpulant diner gorges himself on all there is to offer, while the other guests fail to see what is going on and continue with their faux manners and pretensions. Until the inevitably but still shocking conclusion, which never fails to both humour and disgust at the same time, no matter how many times it is viewed.

Here Conservative Health Secretary, Jeremy Hunt is in the John Cleese role as the smarmy French waiter who first fattens up the Mr Corporate fat cat (originally brilliantly played by the often under-appreciated Terry Jones) and then tempts him with one final sell off - the NHS.

Considering the fate of the original Mr Creosote it begs the worrying question: just where will all the universal privatisation of essential services and corporate dominance end up?