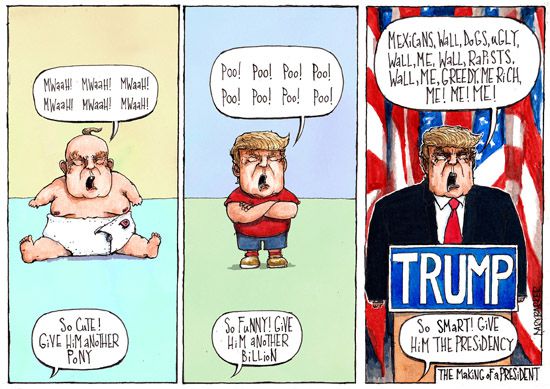 Donald Trump has used divisive and inflammatory language to key into the bigotry still felt in significant numbers amongst the white US population. The same tactics that were used by Nigel Farage in the years running up the UK EU referendum - stoke up hatred of immigrants and blame them for all the ills that globalisation and free market economics has bestowed among the tradtional working classes. The same section of the electorate who have been abandoned by the left as they have moved farther and farther right in order to win elections. There is a saying ddoing the rounds - the UK and the US are having a stupid-off. The UK is winning, but the US have still to play their Trump card. Whereas the UK's decision to leave the EU will be very bad for the UK in the long term, a Trump win will not only be bad for America, but it will be disastrous for the whole world in the short term and possibly the long term too.</p>