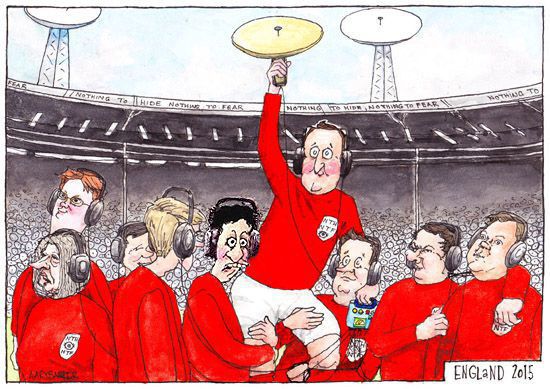 The major parties all joined in support and passage of the UK the Data Retention and Investigatory Powers Act or Snooper's Charter. The party leaders David Cameron, Ed miliband, Nick Clegg and other MPs, were united in support of the Act, aping the 1966 England World Cup winning team in London Wembley Stadium. Supporting the snooper's charter drip act snooper's charter. There can be little doubt the Conservatives were the instigators of this bill and the others merely went along knowing if they didn't they would be lambasted in the media for not suppriting anti-terrorism legislation. This will allow unprecedented powers to the coaltion government, to snoop into the emails, website history and other personal details of every person in the UK. This only adds fuel to the fire for those accusing the country of becoming a totalitarian police state.

The legislation pushed through by the Conservatives, dictates that internet and phone companies should collect customers' personal data, tracking their phone and internet use, and store it for a year, plus give access to police, security services and 600 public bodies on demand. Very few MPs abstained from the vote, but chief among them were Labour MP, Tom Watson and Conservative MP, David Davis, who applied for a judicial review of 'emergency' legislation, which was rushed through parliament. The Drip Act on the back of an artificially created emergency. Davis told a Westminster press conference that the bill will have the effect of 'tagging every single person in Britain who has a phone'. While Tom Watson,said 'the act failed to answer concerns that the blanket retention of data was a breach of fundamental rights to privacy.' Liberty director, Shami Chakrabarti, said the MPs' decision to go to court represented the legislature and the judiciary fighting back against the executive. James Welch, Liberty's legal director, said it was "as ridiculous as it was offensive" to claim that the crisis was an emergency when the European court of justice privacy ruling striking down the existing European Union directive on data retention was more than three months ago. "The government has shown contempt for both the rule of law and parliamentary sovereignty, and this private cross-party stitchup, railroaded on to the statute book inside three days, is ripe for challenge in the courts," said Welch. Liberty is to argue on behalf of Davis and Watson that the new legislation is incompatible with article 8 of the European convention on human rights, which includes the right to respect for private and family life, and article 7 of the European charter of fundamental rights – respect for private and family life and protection of personal data.

It is difficult to see how the Conservative Party can realistically hold on to their claims to be the party of individual freedoms with this snooper's charter.