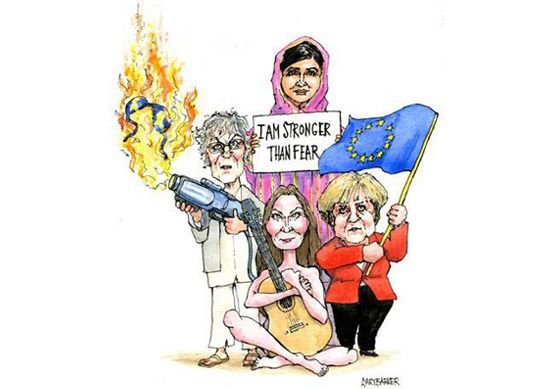 The Nobel Laureate, German Chancellor, writer and singer caricatured as women leading the way in their respective fields for an editorial article in Gallery Magazine.

For one so young Malala has experienced many traumas and triumphs in her short life to rise to become one of the world's most recognisable faces. Angela Merkel grew up in the old East Germany but took an active role in the growing democracy movement after the fall of the Berlin Wall in 1989 and she rose to become the German leader in 2005 and is now recognised as one of the most powerful women in the world. Germaine Greer was at the forefront of the modern feminist movement in the 1960s and 70s, and remains an outspoken advocate on women's issues today. She is perhaps best known for her book The Female Eunuch. Carla Bruni is a former model and singer songrwriter. She is married to former French President Nicolas Sarkozy.