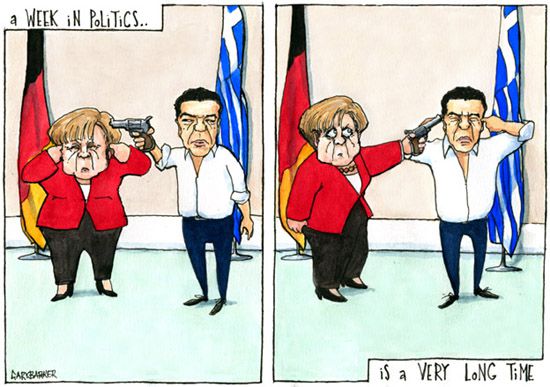 The great reversal with the old political adage very relevant

Only last Sunday the Greek people voted 60 - 40 to reject the latest EU bailout plan which would have meant yet more hardship and austerity for the people. Now just one week on Alexis Tsipras has had to yield to pressure and accept a bailout plan that is even harsher than the one rejetected in last weeks' vote.

In the cartoon the Greek PM holds a gun to German Chancellor Angela Merkel's head re: the vote on Greece to reject the latest EU bailout that would at least for now assure Greece's continuing membership of the Euro club of nations. Jump forward one week and the roles are reversed as Tsipras has been forced to accept an even more asutere deal. Thus reflecting Harold Wilson's famous quote 'a week is a long time in politics'.

This editorial has been picked up and shown on the BBC and included in a story in the Washington Post.