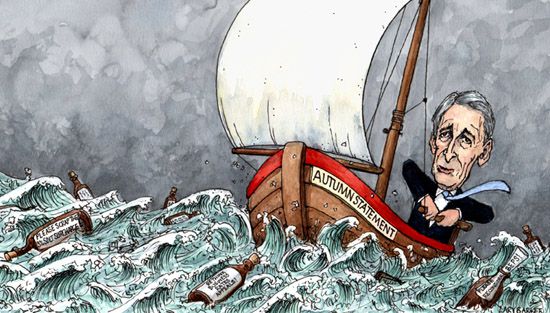 With the most extensive wage freeze for over 70 years, trade deficit figures the worst since 1955 and the national debt doubled since 2010 the new Chancellor Philip Hammond warns of even more tough times ahead. Surely a friendly media cannot defend such an economic record for very much longer before the electorate begin to be able to read the truth through the fiction. Following Theresa May's disastrous general election call and the Tories losing their House of Commons majority, ministers were soon suggesting that austerity should be backtracked and an abandonment of the 1 percent payrises that have resulted in all public sector workers receiving an effective pay cut for the past seven years - all except of course MPs. But early suggestions of the PM and chancellor reversing these pay cuts only resulted in more confusion in the coalition of chaos as the easy target teachers were first to denied any more than the usual paltry 'rise' in pay. With public anger growing and political sympathies swinging away from the Tories to Labour it appears all this government's hopes are riding on a successful brexit. Which to almost everyone with any knowledge or grasp of the reality of the UK leaving the European Union is of course completely deluded.