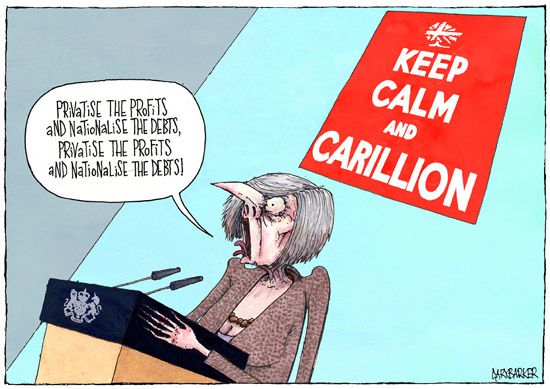 Next
Theresa May cartoon

Theresa May refuses to accept any responsibility for the Carillion mess her government created in continuing to award the company contracts after three profit warnings. There now appears to be a groundswell of opinion finally forming that the over-reliance on the private sector to provide public services was a big mistake. The ideology that has been fed to the people of the UK for decades that only the private sector could offer efficient value for money has been shown yet again to be at best ideoligical fancy and at worst a massive deception and fraud on the people whose taxes go to pay for our services and safety net system. PFI is also now almost universally accepted to have been a disaster, which was actually always clear to some of us in the first place. The truth is value for money just cannot come from a system with a middle man that requires a profit. An efficiently run public sector is clearly the best solution and there is no reason why this should not succeed.