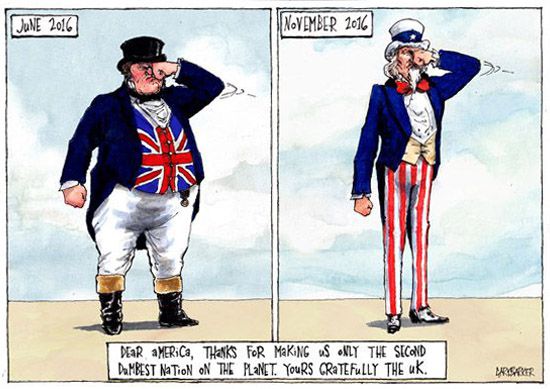 From Brexit to Trump

John Bull and Uncle Sam, the symbols of the UK and the USA deliver self-inflicted blows re: the Brexit vote and the Trump presidential election. Both symptomatic of the 'up yours' vote reflecting the deep disatisfaction of the disenfranchised with the current political system that has isolated and brought hardship to millions.

The populist votes that swept the EU leave camp to Brexit victory in the UK and Donald Trump to the Whitehouse in the US came from the same disatisfied demographic. It remains to be seen how long it takes these voters to realise they voted counter-intuitively in both cases for programmes and a candidate will only make the things they voted to protest against even worse for them. Then what?</p>