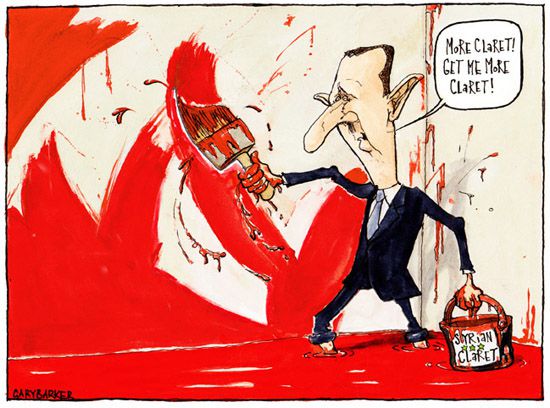 The Syrian President paints the walls with the blood of his people, for The Guardian comment.

The conflict in the Middle Eastern country has raged for two years and ever since Libya fell the regime has come under increasing pressure to first stand down and then military pressure from rebels to force a regime change. The totalitarian family regime has held on to power for decades by brutally crushing any dissent or rebellion. But this latest uprising threatens to rip the country apart in all out civil war. To begin with the rebels made great in roads and they actually looked as though they may succeed. But the incumbant government receives support from Russia and the military hardware aid they received has been used to crush and almost completely destroy all major centres of the rebellion.