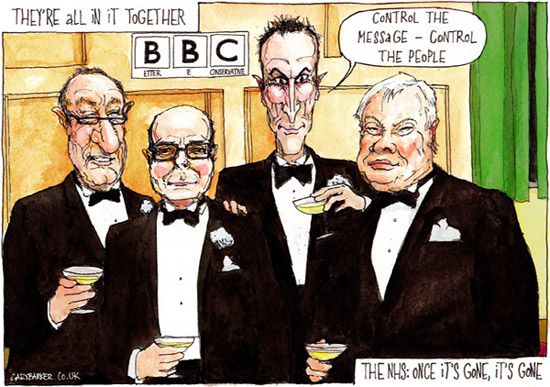 Next..
The British Broadcasting Corporation and the Conservatives - Tribune

The national broadcaster since its inception has been legally bound to remain politically impartial. Throughout the ensuing years there have been claims levelled from both sides of the political divide at bias in programming and reporting. However since the 2010 these claims of bias in favour of the coalition and especially the Conservatives have become ever more angry. The corporation has to some extent made a rod for its own back in allowing so many of its key positions to be filled by either former Conservative politicians or by people with major links to that party and then becoming highly London -centric. This coupled with them then failing to report on any of the clear moves to privatise the NHS, which are taking place also adds fuel to the fire, especially when the Chair of Trustees has a linsk with a private equity company bidding for State healthcare contracts. Political editorial for Tribune Magazine.