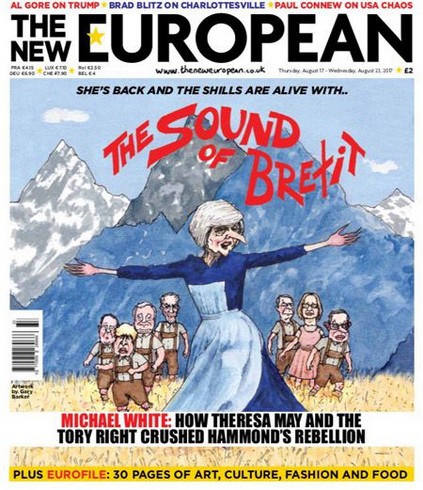 Brexit detailed homage to the classic Sound of Music set during WWII and alienation across Europe. Theresa May as the brexit Maria, with Liam Fox, Michael Gove, Jeremy Corbyn, David Davis, Boris Johnson, Nigel Farage and Amber Rudd as the 'children'. The delusion of the brextremists is palpable and our politicians are merely feeding this delusion and their fantasist views on how well the UK will fair outside the EU, with unicorns and rainbows everywhere. The harsh reality is likely to only hit once the corporate carpetbaggers and their political allies on the right have reduced the UK simply being a tax haven for the rich and a sweatshop economy on the edge of Europe for everyone else. We have less that a year to stop the madness but their seems little chance of anything changing for the better.