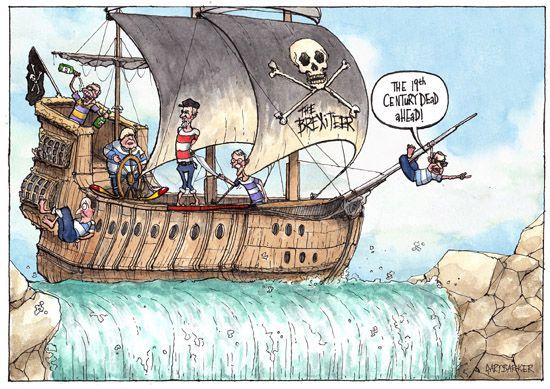 Clown shoes Boris Johnson captains The Brexiteer, while Farage celebrates and Gove on look out completely missing the abyss they have taken us over. The Brexit cartoon illustrates we in the UK arrived at Brexit through he media silencing any alternative voice to hard right economics for over 30 years and they are still doing it. This result was entirely the fault of three men and one organisation: David Cameron, for setting up the referendum just to sure up his own leadership of the Tory party. Boris Johnson, for changing from remain to leave because he thought that would make his chances of being the next PM even better and so adding to the populist propaganda to leave. Nigel Farage, for constantly using populist lies to convince the British people to vote against their best interests. And finally the BBC, for shoe-horning Farage into every political programme over the last 6 years and so turning him from a clown everyone who'd heard of him laughed at, into someone everyone knows and can quote. And so what do we have now? We have the BBC and the the rest of the media convincing the people this was all the Labour leader Jeremy Corbyn's fault, leaving the Establishment free to install the next hard right winger in as PM, who will probably be Theresa May. This person they are selling as the voice of reason, steamrollered the Snooper's Charter policy into the statute books and always wanted to rip up our signing of the European Convention on Human Rights. And so it's all downhill from here. All together now: there's no place like home, there's no place like home, there's no pace like home.