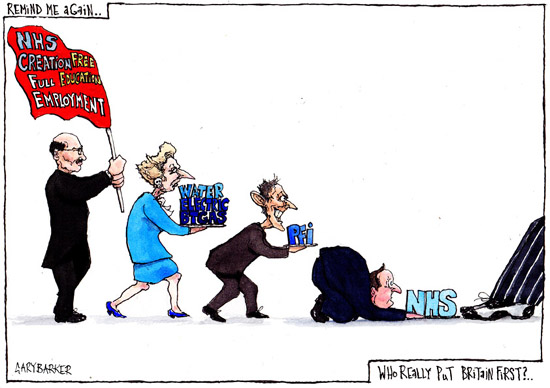 Clement Attlee, flies the flag for progressive policies while Margaret Thatcher, Tony Blair and Prime Minister editorial. The replacing of progressive with the regressive ideology winding in the welfare state and privatisation. Clement Attlee was the Labour Prime Minister just after World War II, Margaret Thatcher and the PM were and are Conservative PMs and Tony Blair was the New Labour PM. Attlee's Labour government was responsible for the introdution of the National Health Service, free education for all and full employment, all things that people once thought positive, but it woudl appear not anymore as the prime ministers of the last 35 years appear to have been making moves to reverse much of these progressive policies, instead choosing to hand over service provision to the private sector with the inevitable for profit motive and less freely available service provision.