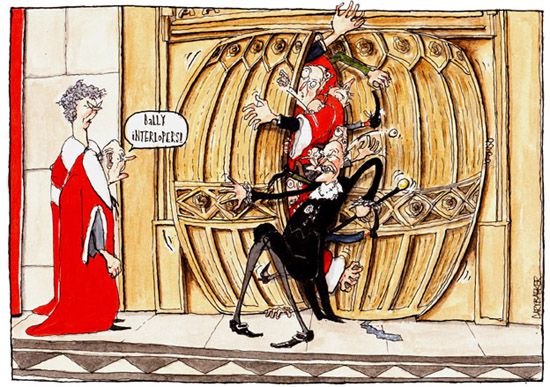 Thirty new peers squeezed into the House of Lords cartoon

Thirty new peers squeezed into the House of Lords cartoon

In the editorial Black Rod uses his baton of office to try to lever the new members into the chamber and close the doors, which bulge at their hinges.

The newly ennobled peers swell the numbers to 779, a full 129 more than the elected members MPs of the Commons, hence the nature of this editorial.

Controversially party leaders still hand peerages to party donors who can then play a part in passing bills and writing into law new statutes without ever being elected democratically. Also members of the upper chamber can also legislate laws even if they have a criminal record themselves that would preclude them from actually enforcing the laws they write as a serving police officer.