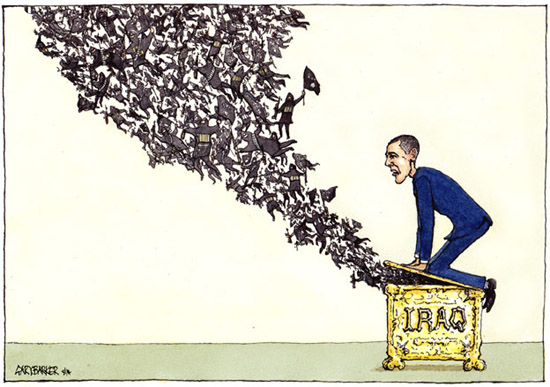 The US President struggles to close the lid on the Pandora's Box, first opened by his predecessor, George W Bush in response to the 9/11 attack, The image shows the ISIS militants flooding out to wreak havoc and despair across the Middle East.

The militants and their backers are using the current regional unrest and civil war in much of the Middle East to attempt to create a single Islamic State across the region.

With the ISIS militants now threatening to destabilise the Middle East to an even greater exteent and determined to creat an Islamic caliphate across national boundaries, ignoring all existing political lines.

Many of the origins of the troubles in the region going back at least at least to World War II, the rise of the ISIS militia has been connected with the 2003 invasion of Iraq and in Syrian civil war. The current conflict in Gaza between the Israeli IDF and Palestinian based Hamas and the resulting deaths of many innocent civilians just adds to the increasing image of a region on the brink of all out collapse and inevitable war.

not so special relationship