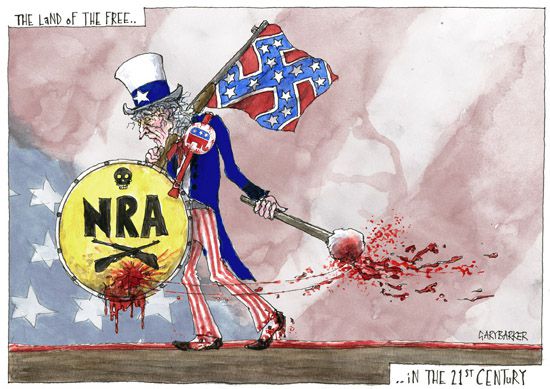 Three months after the Florida high school shootings, Santa Fe High School became the 10th school targeted in three months. The USA has become increasingly polarised by police shootings of unarmed black victims. The political right has made increasingly bizarre excuses for these killings and this culminated in the racial terrorist attack by a white racist on a the congregation of The Emanuel African Methodist Episcopal Church in Charleston, South Carolina, resulting in the deaths of nine people, including the pastor and state senator Clementa C. Pinckney. The state's capitol building in Columbia up to and after the massacre flew the 'rebel flag' associated with the Confediracy and carrying the baggage associated with slavery. A number of prominent Republicans responded to the murders by seeking to blame the Democratic senator and victim for his death and the deaths of the other eight victims, rather than the actual murderer, because 'he stood for gun regulation'. It is hard to tell whether these bizarre excuses are racially motivated or merely the kneejerk rantings of those who would do anything to protect the arms industry from blame. Either way such views have been met with the derision they deserve in a world sickened by what they are seeing happen in the world's richest nation. It would seem relative wealth is no indicator of relative civilisation.