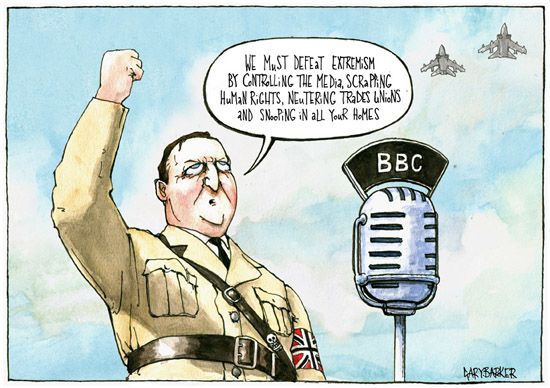 The Prime Minister outlines why we must defend ourselves against Muslim extremists while imposing extremist policies himself. The government hold a virtual stranglehold on the BBC and have a majority of the newspapers onboard.

They have stated their intention to neuter trades unions, scrap Human Rights, impose £20 billion in further cuts to welfare and services and top of all that they are to introduce the Snooper's Charter meaning they can snoop in all our homes. With all of this we have to ask ourselves just who the extremists are? Of course the terrorists pose a very real threat, but the UK government poses a threat to the living standards, freedoms and privacy of millions of Britons. With the Labour Party in disarray since their General Election defeat on 7th May they Conservatives will face very little opposition from them and this was illustrated very clearly in the utter debacle of lABOUr MPs being whipped to abstain in a vote they should all have voted down under the temporary leadership of Harriet Harman. It will be in all our best interests for the Labour Party to remember that the official opposition is meant to oppose and not appease government policy and expecially such extreme policies are not being passed.