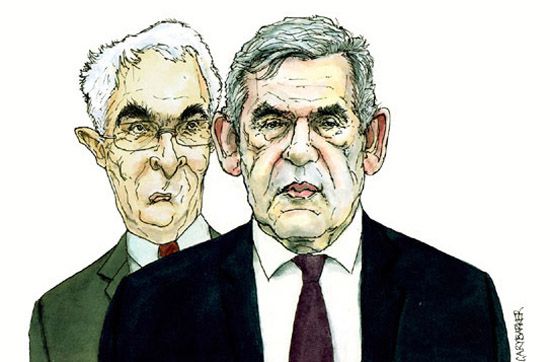 The Prime Minister from 2007 until the 2010 election and succeeded by the Conservative PM of the coalition with the Libdems.

He had previously been Chancellor of the Exchequer for ten, succeeding Ken Clarke following the landslide defeat of the Conservative government in the 1997 General Election. While in this position he gave the Bank of England the power to set interets rates and the responsibility for banking supervision to the Financial Services Authority. As PM he presided over the country suffering the great financial crash of 2008 and global recession, resulting in the banks being bailed out with £500 billion which then heavily indebated the UK, which by 2014 the country was still waiting for its money back.

The Chancellor of the Exchequer from 2007 until the 2010 General Election, he abolished the 10% starting rate of income tax and lowered the basic rate from 22 to 20%. He currently leads the 'Better Together' campaign canvassing for the no vote in the 2014 Scottish Independence referendum.