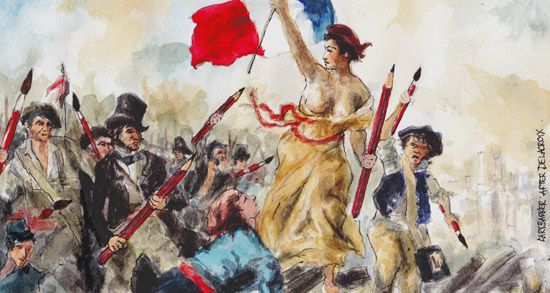 Liberty leading the people against the tyranny that would destroy our free speech. Created for Tribune by Gary Barker

In the wake of the horrific attack on French satirical magazine Charlie Hebdo in Paris, political cartoonists around the world have shown their support for those tragically killed, injured and all their loved ones. They died for what their believed in and we should never bow to terrorists nor their threats, nor should we point the finger at people that this horrific attack has absolutely nothing to do with. Humane people who are Christians, Muslims, Jews, aethiests, whatever their beliefs, must all condemn this attack by terrorists, whatever excuse the murderers have hidden behind as their twisted excuse for their actions.

Let's hope this call to arms only means more people pick up their pencils and brushes rather guns and knives. I have a feeling those politicians now espousing freedom of speech will soon be trying to us this tragic events to enforce legislation upon us all that will curtail even more of our freedoms.