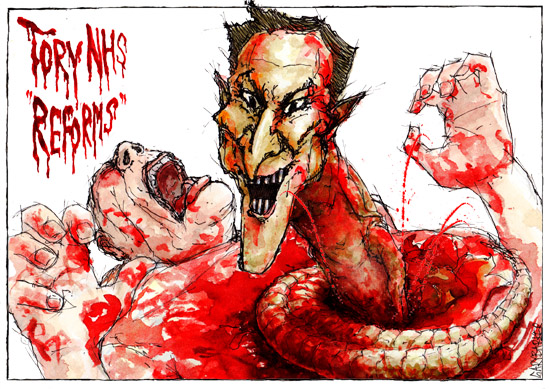 Jeremy Hunt alien chest burster. The NHS was founded by the UK's first majority Labour Government elected at the end World War II had  in the 1948. Since then it has gone through periods of great change and political interference from various parties. David Cameron made a personal pledge and promise before the 2010 election that if the Conservatives were to win power 'there would be no top down re-organisation'. However the coalitions first Health Secretary, Andrew Lansley, implemented his personal manifesto for change to the service, which included wide-ranging top down reorganisation of the system and also greater involvement of the private sector. He was eventually replaced by Jeremy Hunt, who himself had previously authored a document outlining the privatisation of State healthcare provision in the Britain.