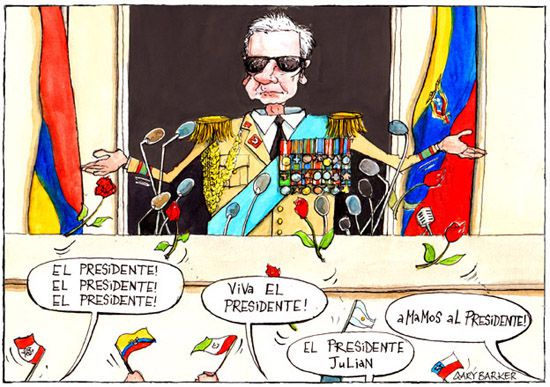 The Wikileaks founder addresses his supporters from the Ecuadorian Embassy in London, where he has been hold up since seeking asylum there. For The Times.

Having co-founded the whistle-blowing website in 2006, he has been its editor in chief since then and first came to prominence through the releasing of the diplomative documents leaked by Bradley now Chelsea Manning. In the same year the Swedish authorities began investions into claims of sexual offences and in 2012 he took refuge in the Ecuadorian Embassy and was granted political asylum there after extradition warrants were issued by Sweden. In the last week he has revealed he will be leaving the embassy and denied this is down to ill health, although the effects of not venturing outside for two years will have inevitable effects on health.