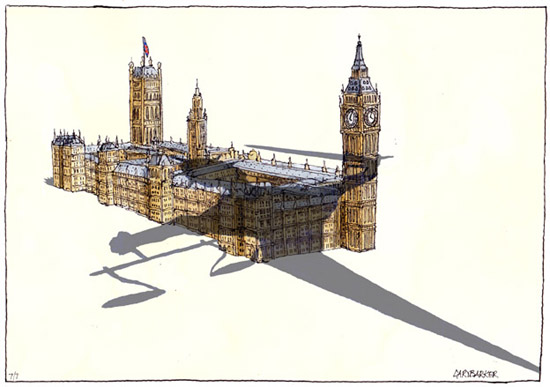 the London Palace of Westminster is the scene of accusations in the midst of historic claims of abuse and cover-up by politicians. Editorial created by Gary Barker for the London Times.

When the government realised they could no longer ignore the claims of child abuse linked to members of parliament, Theresa May immediately appointed Retired judge Baroness Butler-Sloss. Who later stepped down as head of the inquiry into child sex abuse stating she was  "not the right person" for the job. The Baroness was the sister of Lord Havers who it has been claimed  was allegedly implicated in a cover up of the abuse in the 80s and had tried to persuade former MP Geoffrey Dickens against naming an alleged paedophile in the House of Commons.

Tory peer and former Conservative Home Secretary Leon Brittan was questioned by police in early July over an allegation of rape of a 19-year-old student at his London flat in 1967 before he became an MP. Detectives have also launched an investigation into alleged child abuse at a school set up by a friend of the late paedophile Liberal Democrat MP Cyril Smith. With other Establishment figures such as Cliff Richard being questioned over alleged historical accusations claims, it is looking like the revelations are just beginning to emerge. Following the resignation of Butler Sloss the government stated they were in hunrry to appoint a replacement.