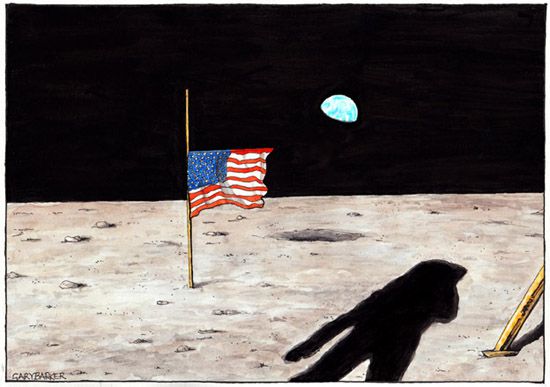 The first man to walk on the lunar surface has died aged 82.

An inspirational and brave man who shunned the limelight. The editorial shows the long influential shadow on history, Armstrong has cast, as the lunar stars and stripes flies at half mast as we look back to the distant Earth.

It is now 45 years since the first manned Moon landing, the culmination of a decade of direct technological efforts in the USA and based on the foundations of all Human scientific development up to that point.

On September 12, 1962, President John F Kennedy, pledged that the USA would put a man on the Moon, by the end of the decade. In his speech he said 'we choose to go to the Moon in this decade and do the other things, not because they are easy, but because they are hard.'

The landing was seen by 125 million viewers in the USA alone. Sadly by the time of the Apollo 17 mission, viewing figures fell below that of regular tv quiz shows.