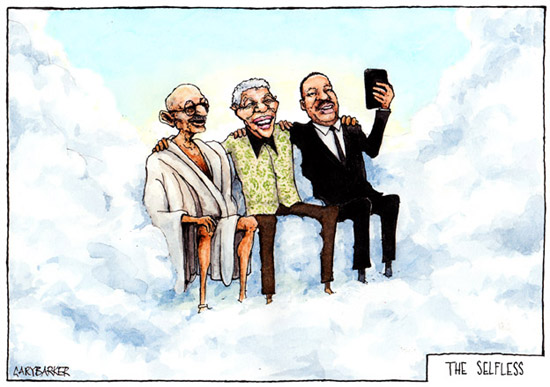 The great man joins the other great freedom fighters, Gandhi and Martin Luther King for a group photo. Referencing the embarrasingly selfish, selfie, Barack Obama, David Cameron and Helle Thorning-Schmidt took of themselves at the memorial service.

The brutal Aparthied regime in South Africa saw many people subjected to the most inhumane treatment and many were 'disappeared'. Madiba as he was affectionately known to many, brought South Africa successfully through the highly volatile post-Apartheid days when the country could have easily decended into disparate factions and even civil war. The calm message of forgiveness carried by the man who had as much right to feel embittered to the former leaders as anyone. But such was the strength and genuine altrustic nature of the man that the whole country came together to listen and follow. Sadly the days following his presidency were not as successful and now following his passing the best way his people could hope to honour him is to live together in peace.