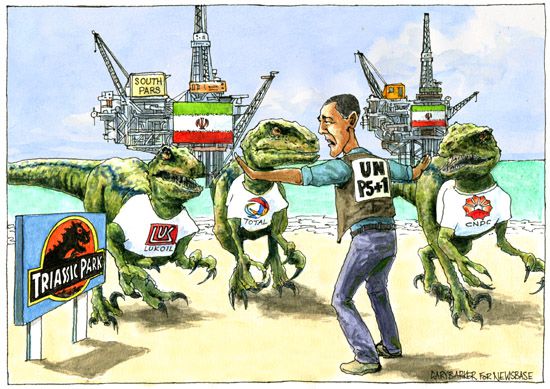 The US president faces down the LUKOIL, TOTAL AND CNDC Big Oil raptors in a satirical take on the scene from Jurassic World featuring Chris Pratt.

The balance of oil production, supply, domestic demand and international relations is a very complex issue. Keeping big business happy, foreign governments, the people of other nations and the domestic population often leads to conflicts of interest and inevitably results in compromise. The what differs between politicians and political parties is which of the concerned parties get the best deal from such compromise. Historically poor decisions in this area have resulted in international conflicts and far-reaching consequences that echo down through time.

Many claimed the invasion of Iraq by US led forces was all about the oil. But this was only part of the argument and again the decision to invade a sovereign country is still resulting if far-reaching consequences today with ongoing bloody conflict in the Middle East and the constant threat of terrorist attacks across many parts of the world.