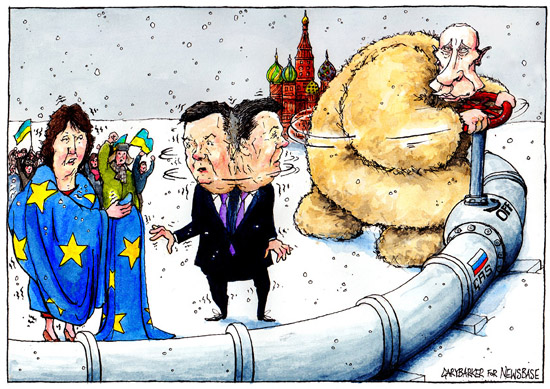 The Russian President threatening to turn off the gas supplies to the rest of the Europe if the former Soviet republic moves to join the EU. Gas industry editorial for Newsbase.

Western Europe is heavily reliant on the gas from the former Soviet Union and in the winter many rich countries would struggle to hear properties, service buildings and businesses if the supply was cut. This led to leaders such as Germany's Angela Merkel avoiding being drawn into outright criticism of the Rrussian leader's actions.

Since the creation of this editorial eastern the country has been effectively annexed by Russia and virtual civil war and the downing of the Malaysian flight MH17 have brought the country close to all out war. Russia has gathered trucks at the border claiming it they are there to deliver humanitarian aid to the rebels in the east of the country but it is widely thought these are merely their to deliver arms and men to the re-enforce the rebellion.