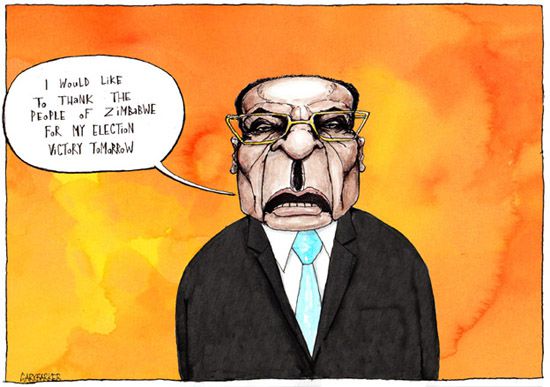 The president menacingly thanks the people of Zimbabwe for his re-election, the day before the polls even open to the electorate, editorial comment for the London Times.

This piece also featured on BBC Newsnight as part of their coverage of the Zimbawean elections.

Depsite many accusations of voting irregularities and fixing he was re-elected as President in 2013 and was the first Prime Minister the newly renamed Zimbabwe elected in 1980. The position of Prime Minister was abolished in 1987 and he took up new office of President of Zimbabwe, with increased powers in the process. He was re-elected in 1990, 1996, and in 2002 there were claims of widespread vote-rigging and gerrymandering. He was re-elected later in 2008 and 2013 again amid allegations of election fraud and intimidation.

It is now likely he will remain in office for life or until he chooses to step down and allow a successor to take his place, but when that time comes it is likely to be someone made in his own image