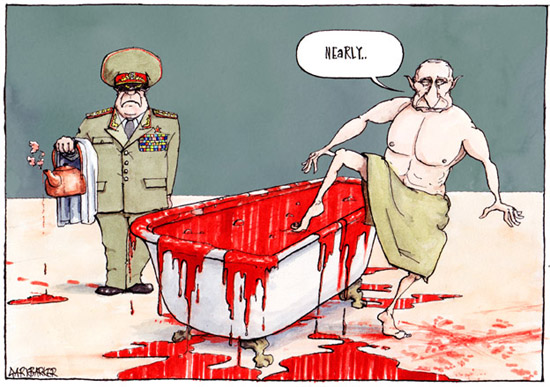 The Russian President dips a toe in the blood bath. Referring to warnings from EU politicians that Russia is on the verge of all out war with Ukraine.

With both sides blaming each other and with many claiming the hand of hand of the USA can clearly been seen in the escalation and sabre rattling that threatens Europe with its biggest conflict since World War II.

Ever since the new pro EU president of the former Soviet Republic was elected last year Moscow has been at odds with the country. First threatening to cut gas supplies to both it and the rest of the EU and then Russia annexed The Crimea and pro-Russia rebels have taken over large parts of the east of the country and the downing of Malaysian Airlines flight MH17 by a surface to air missile, killing all on board, brought instant international condemnation of the Rebels and those pervceived to be backing them in Moscow.

German Chancellor Angela Merkel led calls for the escalation to stop and warned the President that his country would face further economic sanctions if he he did not pull back forces amassed on the the border between the two countries by Thursday.