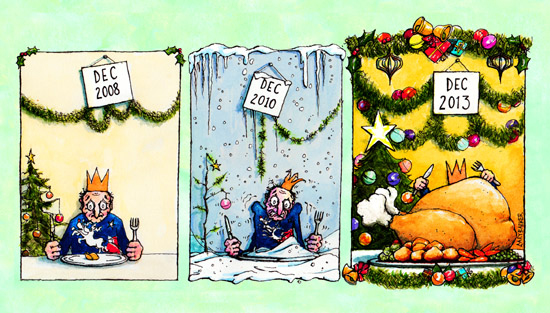 Suggesting three years of hardship are coming to an end in this idealised scenario.

The UK coalition governments stewardship of the economy has made much of the apparent recovery and success of Chancellor GeorgeOsborne's austerity plan to reduce the national debt, through cutting government spending. Critics would say very few people are actually feeling the benefit of the suggested upturn, as inflation is still rising about average, which means a real terms drop in living standards for the majority, which has been true year on year since 2010. This coupled with the rise in self-employed people without employee benefits is casting a shadow over procedings. If the electorate are to be convinced things really improving they will have to be allowed to feel part of it if the Conservatives are to win an overall majority in the 2015 General Election.