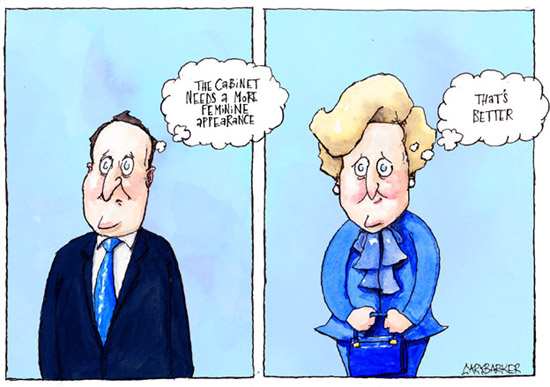 The Tories, with one and a half eyes on next year's election sought to bring more women into cabinet to broaden appeal.

The reshuffle however also so saw just about all the remaining old One Nation Conservatives / Wets leave government, raising claims the party has swung even farther to the right.

With only a year to go to the election, every party is concentrating on improving their appearance to the electorate. The Libdems are only a damage limitation exercise, now back-tracking and apologising for past sins. Labour are trying to distance themselves from the unions and any suggestions they may be business hostile. With pictures of an all male fron brench going viral on social media the Conservatives recognise that they have to balance their appearance of a male monopoly in government.

There is also another fly in the ointment for the three main parties in the form of UKIP and the Farage effect appears to be dragging the political centre even farther to the right and so disenfranchising even more people who feel they have no real choice in the electoral system. With the single issue euro-sceptic party managing turn an issue that was previously low on most people's political agenda into the main issue, one has to question how they were able and enabled to do this?

With an already cynical electorate it remains to be seen just how effective their efforts will be, however it is likely that fewer people will feel represented by any of the major parties and use their right to vote