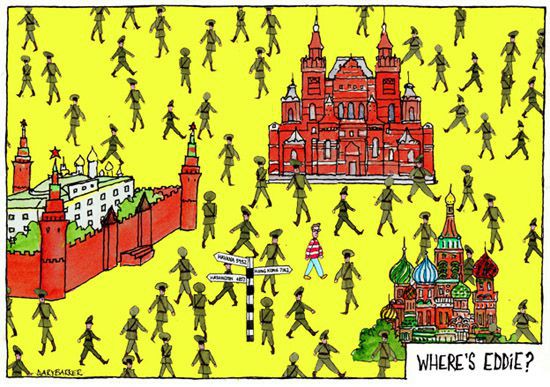 The whistleblower left Hong Kong for a flight to Russia and was rumoured to be in Moscow at the time of drawing, hence the Where's Wally / Waldo reference. Editorial created for the London Times by Gary Barker.

Labeled a spy and a traitor by many for revealing US military and operational secrets, he is also viewed as a heroic champion for freedom of information by many others. Whichever way he is viewed it has to be said the general public and many prominent international politicians, including the German Chancellor Angela Merkel know an awful lot more about how insidious the bugging, by the US security services, of those who are supposedly important allies is. And questions must be answered as to why these people are being covertly monitored? Because they are surely not link to terrorist threats so therefore their motives must be ulterior and possibly have more to do with economics that security.

Since then the UK government, who obviously took inspiration from the US snooping, has introduced its own surveillance legislation known as the Drip Act and is labelled by critics as the Snooper's Charter. The disappointing factor in its introduction was that it received cross-party backing by the big three.