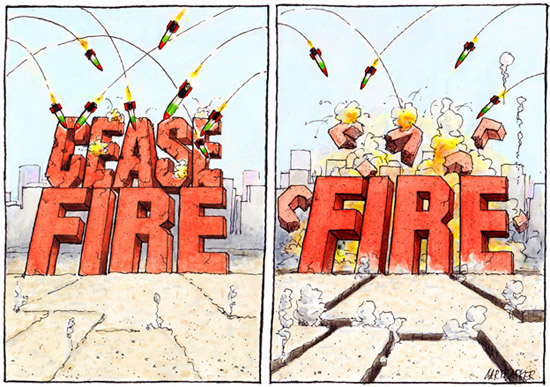 The latest temporary ceasefire in the Middle East is broken by Hamas rockets and IDF destroying tunnels.

With the death toll rising ever higher and disproportionate number of the victims being Palestinian children, the UN has told Israel they may have committed war crimes in Gaza

John Kerry and Philip Hammond have attempted to broker ceasfires that appear to have little effect. Hamas keeps firing its rockets that larger explode harmlessly over the 'Iron Dome', while the IDF missiles have a devastating effects on Palestinians, including the destruction of a UN run hospital. Many of of the Middle East's problems  go back at least to World War II. The current conflict in Gaza between the IDF and Hamas and the resulting deaths of many innocent civilians just adds to the increasing image of a region on the brink of all out collapse and inevitable war. Since this mages was created Israel have come under increasing international pressure, with even their biggest allies in the US and UK beginning  to be openly critical they are pulled back from further incursions and reduced the amount of rocket attacks. This has led to they and Hamas making greater attempts to creat a lasting ceasefire with the involvement of Egypt. Now the world can only wait to see if it lasts and the killing of innocents at least in this conflict stops.