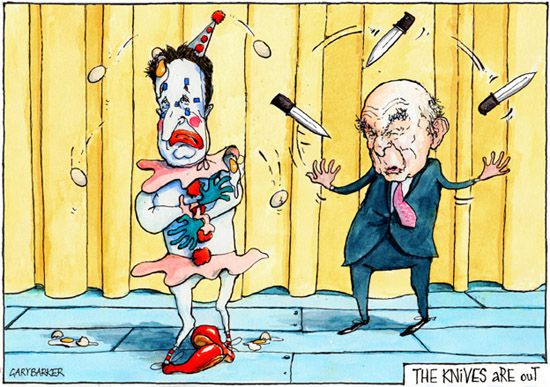 Following a series of gaffs, the Libdem leader appears a the clown and his rival for the leadership of the party, Vince Cable, looks set to stab him in metaphorically in the back. Created for the London Times.

The Deputy Prime Minister has struggled to come back from the tuition fees fiasco and has since had little success in raising his perceived relevance among much of the electorate and a series of slip ups have left his poll ratings at an all time low. This has opened the door to the ambitious Deputy Leader of the Libdems and Secretary of State for Business, Innovation and Skills. Despite such negative polling it looks as though the Libdem leader will survive to the take the party into the next election but with the party's standing still at an all time low it is unlikely he will survive beyond that.